Curious articles about Gaspra and Crimea:
• Camp and extreme tourism: three rules.
• Nature has no bad weather in Crimea.

The Robber and the Water-Nymph

Once upon a time, a beauty Arzy lived in Miskhor. She was slender, lissome and had bright black eyes, which gave no rest to many people. She often went to the fountain to have a rest near its fresh streams. The greedy merchant Ali-Baba was Arzy’s neighbor. He looked out for beautiful girls in the neighboring villages, kidnapped and sold them to the harems of rich men. Ali-Baba had forthought to kidnap Arzy. But suddenly the news spread: Arzy is going to become married! The merchant became depressed… But the villain had a piece of luck. The day before the wedding the girl came to the fountain to say goodbye, since she was going to become married to a guy from the faraway parts. There the trader was on the watch for her. Ali sold the unhappy girl to tlie Sultan’s harem. She felt miserable among the luxury of the palace. In some time, she gave birth to a boy, but Arzy could not love the Sultan. Having taken her child, she ascended to the seraglio’s wall and plunged into the sea. That evening the Miskhor citizens saw for the first time on the seashore the grievous water-nymph with a child… 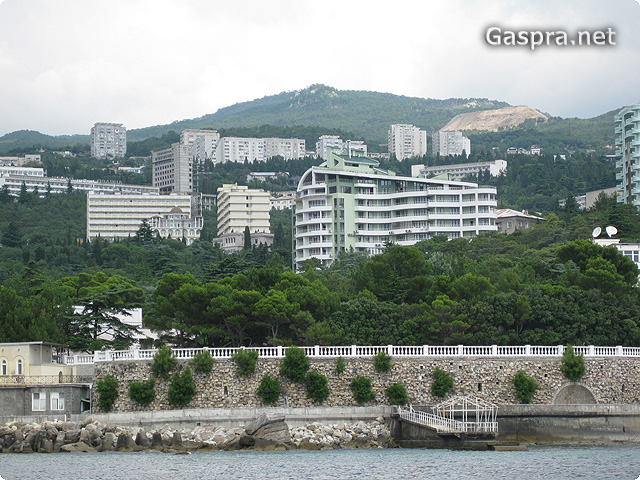 In the medieval ages on the Cape Ai-Todor (St. Theodore) a monastery was located, for this reason the cape was also called Monastyrsky. Above, on the Aurora’s Cliff, there is the miniature castle, which has become an emblem of the southern coast. It is «Lastochkino gnezdo», built in 1912 by the architect A. Sherwood for the German entrepreneur Baron von Steingel. At present, an Italian-restaurant is located there.

In the 1st century A. D., the Roman legionaries built the fortress on the Cape Ai-Todor. Since the end of the 19th century, the remains of this fortress started to be called Kharaks (meaning in the Greek language «fortifying»). Till this time, the archeologists continue to gather the nuggets of information on the history of this defensive construction. The former palace, the Kharaks estate, erected in 1907 on the design of N. Krasnov, is one of the buildings of the «Dnepr» sanatorium.

Gaspra settlement originated from a small village of 37 farmsteads (the 19th century), although the record about it appeared earlier (the 8th century). At present, in this resort settlement 12,000 people are living. In 1836, the architect F. Alson constructed in Gaspra a palace for the Prince A. Golitsyn. At the beginning of the 20th century, Lev Tolstoy had a rest here; at that time this estate was the property of the Countess Panina. At present, it is a building No. 1 of the «Yasnaya Polyana» sanatorium.

The next settlement located to the west is Miskhor decorated with wonderful parks of the 18th century. The «Dulber» Palace is one of the most beautiful. Prince P. Romanov constructed it at the end of the 19th century. It is made in the Moresque style and could serve an illustration to the fairy tales of the «One Thousand and One Night» series. During the years of the Civil War, members of the Emperor’s family were held in custody there, and they managed to emigrate in 1920.

In 1930-ies the villages of Miskhor and Koreiz were united into one resort economy, there the best sanatoria and rest homes of the southern coast are located.

Majestic and mysterious Ai-Petri Mountain towers above the palaces and parks (1,234 Meters). Its teeth are like a ruined palace. The best way to ascend it is by a rope-way. The lower station is in Miskhor, the cost of rising is 10 hryvnias. It is possible to go to Ai-Petri by an automobile.

In Koreiz, theformer Yusupov’s palace built at the beginning of the 20th century by the architect H. Krasnov is located. In 1945, during the Yalta Conference, the Soviet delegation headed by Y. Stalin stayed there. At present, the historical palace is handed over to the Administration of the President of Ukraine. 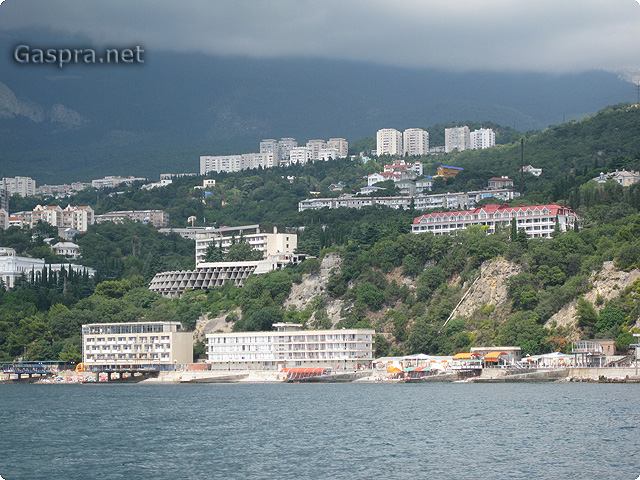